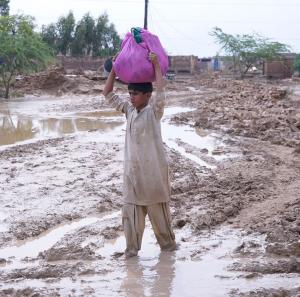 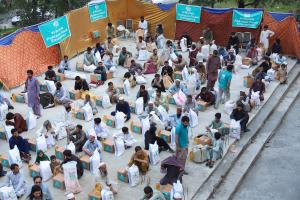 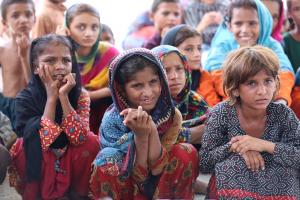 Pictures featured here display Shahpur Road in the Rajanpur district of Pakistan where treacherous flooding has forced residents onto what little dry land is left, the railway track. The team at Al-Mustafa have assembled camps on the existing railway track which is not in use.

The catastrophic floods in Pakistan have displaced a minimum of 7.9 million people and directly affected 33 million, with a staggering 598,000 now living in relief camps such as those set up by Al-Mustafa Welfare Trust. Approximately ten million children are in need of immediate lifesaving care, with a rising risks of disease, drowning and malnutrition. The floods have destroyed homes, schools, water systems and centres providing health care facilities leaving those affected vulnerable and in need of urgent aid. Though the floods have begun to recede, there are various challenges ahead; the leftover dirt and mud, for example, provides an ideal habitat for insects such as mosquitoes.

In Shahpur Road, Rajanpur District, those affected by flood waters are left to shift facilities available into temporary homes; some have resorted to living on either side of the local railway track. Here the Al-Mustafa Welfare Trust team has mounted camps in order to provide aid.

Those now residing on the side of these railway tracks fled floods carrying salvageable possessions, some with children on their backs and cattle in hand, they sought refuge. The lives of those worst affected have been irrevocably changed. Left without homes, having lost almost everything dear to them, their hope dwindles; they are left to rely on the kindness of others.

The Al-Mustafa Welfare Trust response teams have spent time in flood-affected areas assessing people's needs and providing support. The temporary camp set up on the railway is currently providing aid to those that have found themselves forced to live on either side of the almost three-kilometre-long track. Al-Mustafa Welfare Trust has built medical camps in the area to make basic health care accessible once again; additionally, the team is distributing provisions, particularly food and medicine.

The members of the Al-Mustafa Welfare Trust team working closely with those living on and around the tracks found that the local youth population appeared deeply traumatised and consequently depressed in the aftermath of the floods. This was worsened by their inability to play and continue day to day activity due to the water surrounding them. The children were subsequently bound to the tracks with no toys to play with and no world to escape to; the children living here had little to occupy themselves with. Moreover, the children face multiple health issues, such as skin problems and waterborne disease. This is no life for a child.

The floods and subsequent displacement of those affected meant that schools were forced to shut down and the children though wanting to study and be in school, had no option but to await the return of regular schooling. The children at the camp expressed their desire to return to school; one child pointed out to a team member a building housing their school now flooded. Establishing mobile schools would undoubtedly help the children regain some normalcy, supplying activities such as colouring books, pencils, story books, and educational materials like textbooks would further the cause.

On the third morning of the Al-Mustafa Medical Teams stay at the small camp, the team, set to try and cheer up the children they had encountered. They assembled over one hundred food packets containing biscuits, crisps, sweets and juice to distribute amongst the children. The children receiving the prepared food packets were uplifted; they sang national songs, and some hope, even if only for a, twinkled in their eyes. Although Al-Mustafa Welfare Trust, within our capacity, has provided aid there is still considerable work to be done. The people of Pakistan require international aid and support, the supply of which remains inadequate. There must be a team effort on the part of the international community at large to rebuild flood-affected regions. 33 million people depend on it.